The area of northcentral Pennsylvania traversed by the Loyalsock Trail is underlain by a number of geologic strata containing natural gas, the most well known being the Marcellus shale. Beneath the LT this shale lies at a depth of 6,000 to 8,000 feet and is up to 200 feet thick. Natural gas is recovered from the Marcellus shale by means of horizontally drilled wells and the controversial process known as hydraulic fracturing whereby water, sand and chemicals are injected under high pressure into the horizontal wellbore to fracture the shale and release the gas. The gas is then transported via pipelines to its final use (home heating, generation of electricity, industrial processes, etc.)

The following advisory affects the LT in a few short sections between Miles 1.95 and 3.60.

Pennsylvania General Energy (PGE) is constructing a natural gas pipeline from its well pad on Allegheny Ridge (Little Bear area of Loyalsock State Forest) along portions of the Bryan Hay Trail and a small section of the Loyalsock Trail.  The pipeline’s 50 foot wide clearing is directly adjacent to the LT for about 160 yards, from LT Miles 3.51 to 3.60 —  that is, from where the LT takes the left fork where Bryan Hay Road meets old Smith Road, and to where LT turns left and leaves Bryan Hay Road (see LT Guide).

Trail markers are located on the north side of the opening.  Hikers should use caution when traversing this area and avoid construction equipment. The forest district is working with the Alpine Club of Williamsport and PGE to assess and resolve potential long-term impacts to this section of the trail, extending to mile marker 1.95, in totality rather than piecemeal as PGE’s operation moves forward. 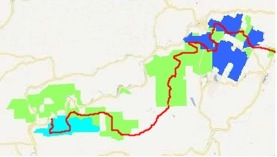 LT hikers may see some activities associated with gas exploration and extraction:

Seismic surveys entail placing sources and receivers to send and receive vibrations in order to detect subsurface geologic features. Plastic flagging, stakes and equipment may be seen along the LT, but they are typically left in place for only a few weeks.

Some existing roads will be widened to accommodate the oversized and heavy equipment used in construction of wellpads, drilling of wells and installation of pipelines. This is a section of the Genesee Trail (LT mile 19.48 to mile 19.65) that was reconstructed in late 2010 to access a new gas well on private land.

Where the natural gas is privately owned there may be wellpads near the LT. One is adjacent to the LT on private land along the Genesee Trail, shown in the photo, with the LT on the left and the raised edge of the wellpad visible on the right. These wellpads will probably remain open for an extended period of time.

Depending on the operator, it takes from four to six weeks to drill a gas well and several more weeks to complete the fracturing operation, after which most of the equipment is removed. Additional wells may be drilled from the same wellpad in the future.

Perhaps the most noticeable impact from gas extraction will be the transportation pipelines, some of which may parallel roads or cross the LT. The pipelines will be most obvious during construction.

When they are revegetated they will offer different views and wildlife habitat.